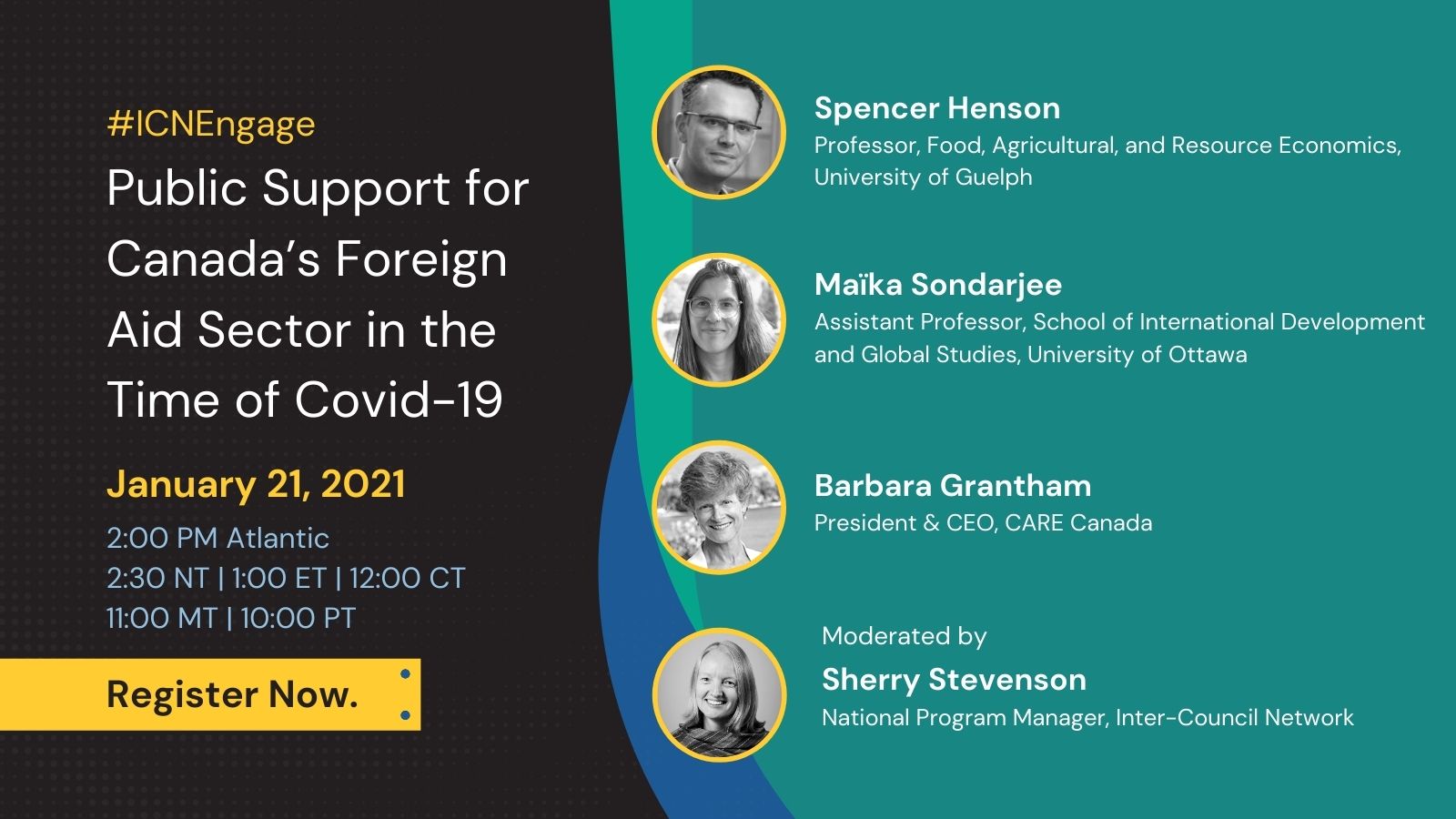 On January 21, ICN hosted the webinar Public Support for Canada’s Foreign Aid in the time of COVID-19. We discussed select research findings from a recent study by the University of Guelph on public support for aid.

The webinar presented the opportunity to engage in dialogue with researchers and development sector actors on this critical issue for the international development sector. The panel consisted of Spencer Henson (Professor, Food, Agriculture and Resource Economics, University of Guelph), Maïka Sondarjee (Assistant Professor, School of International Development and Global Studies, University of Ottawa) and Barbara Grantham (President & CEO, CARE Canada). 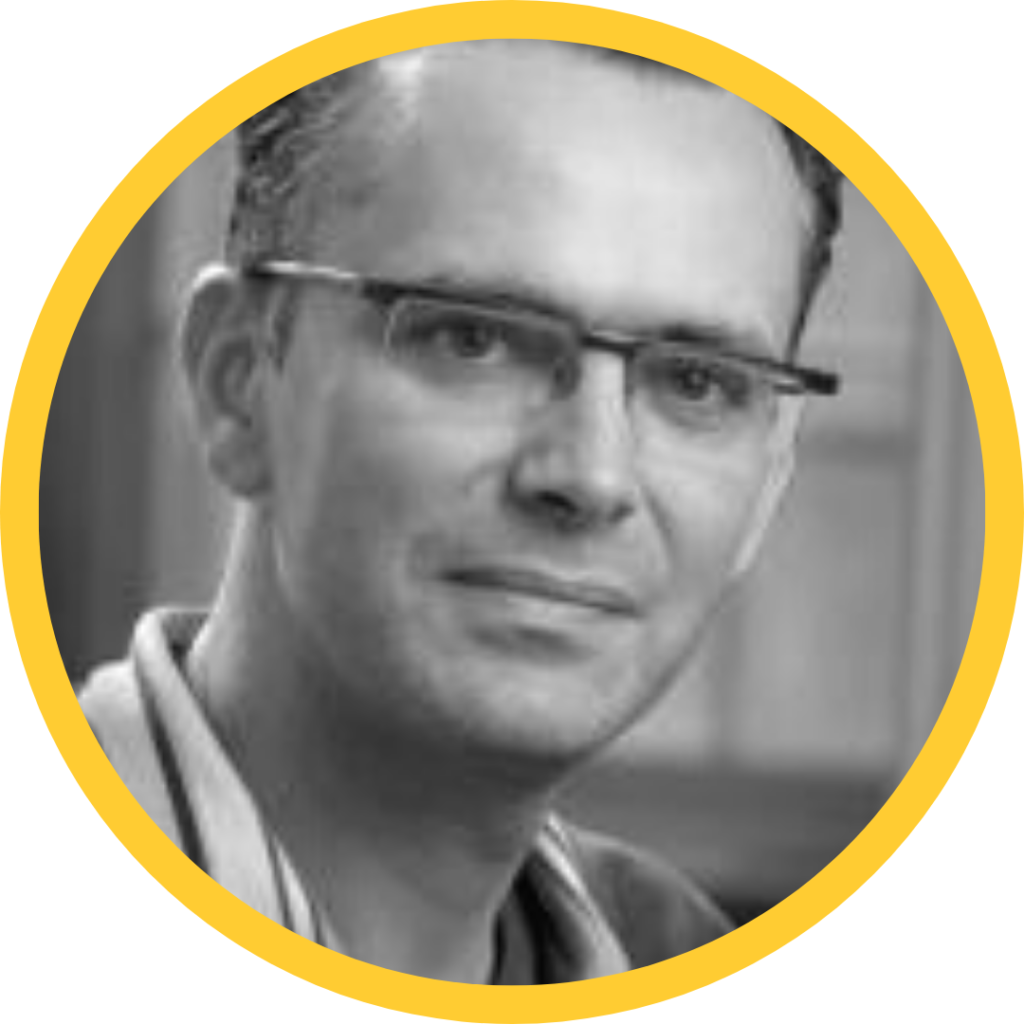 Spencer Henson is a Professor in the Guelph Institute of Development Studies (GIDS) and Department of Food, Agricultural and Resource Economics at the University of Guelph. His research interests are focused on food insecurity and nutrition, and on public support for development. He has undertaken research in over 70 countries and worked extensively with bilateral and multilateral donors and civil society organisations around the world.  Currently, he is a leading a research program on public understanding and support for development in Canada, including attitudes towards aid and the propensity to make donations to civil society organisations working internationally.

Response, Context and Analysis by 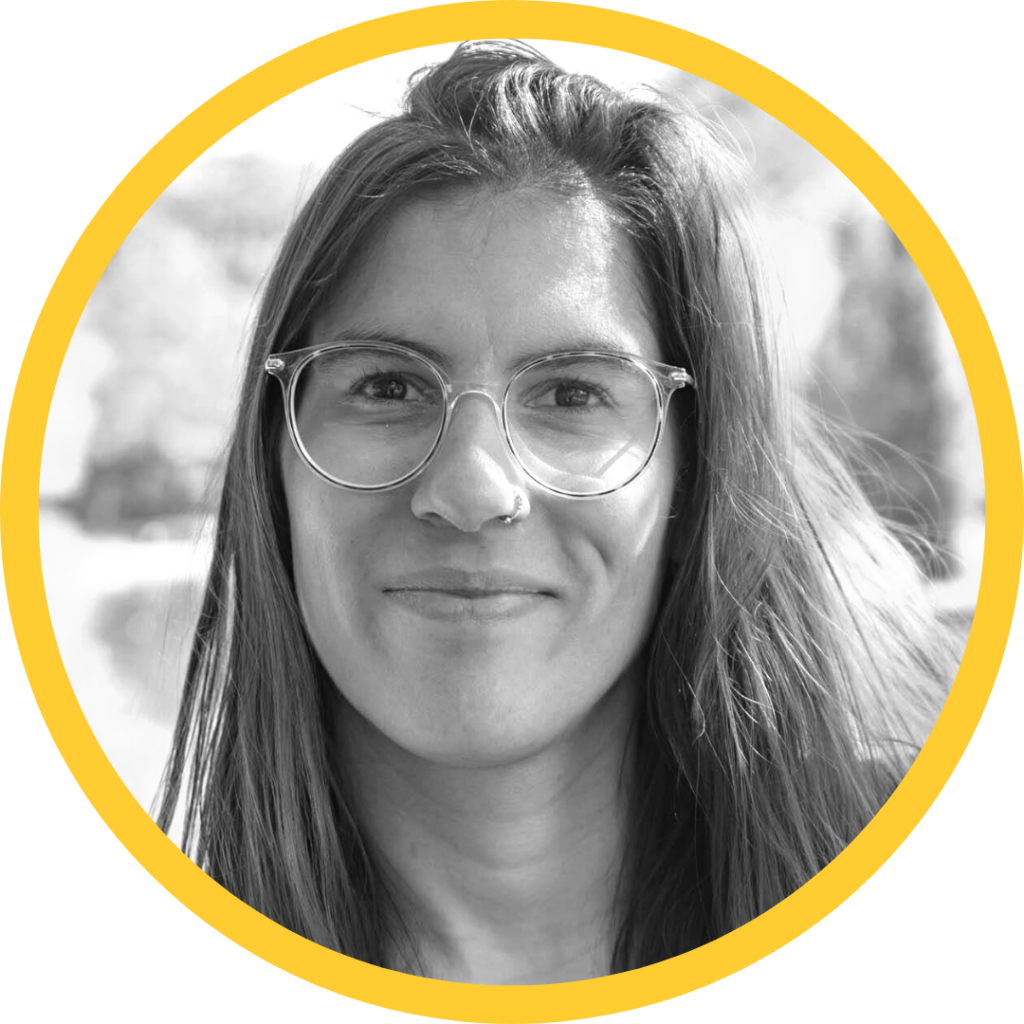 Maïka Sondarjee is an assistant professor at the School of International Development and Global Studies at the University of Ottawa. In 2020, she was awarded a Banting Postdoctoral Fellowship at the Department of political science, Université de Montréal. Her research focuses on the inclusion of local populations in policymaking at the World Bank, women’s empowerment in South Asia, global governance, as well as feminist and development theories. Her first book, Perdre le Sud. Décoloniser la Solidarité Internationale, was published in 2020 by Écosociété. 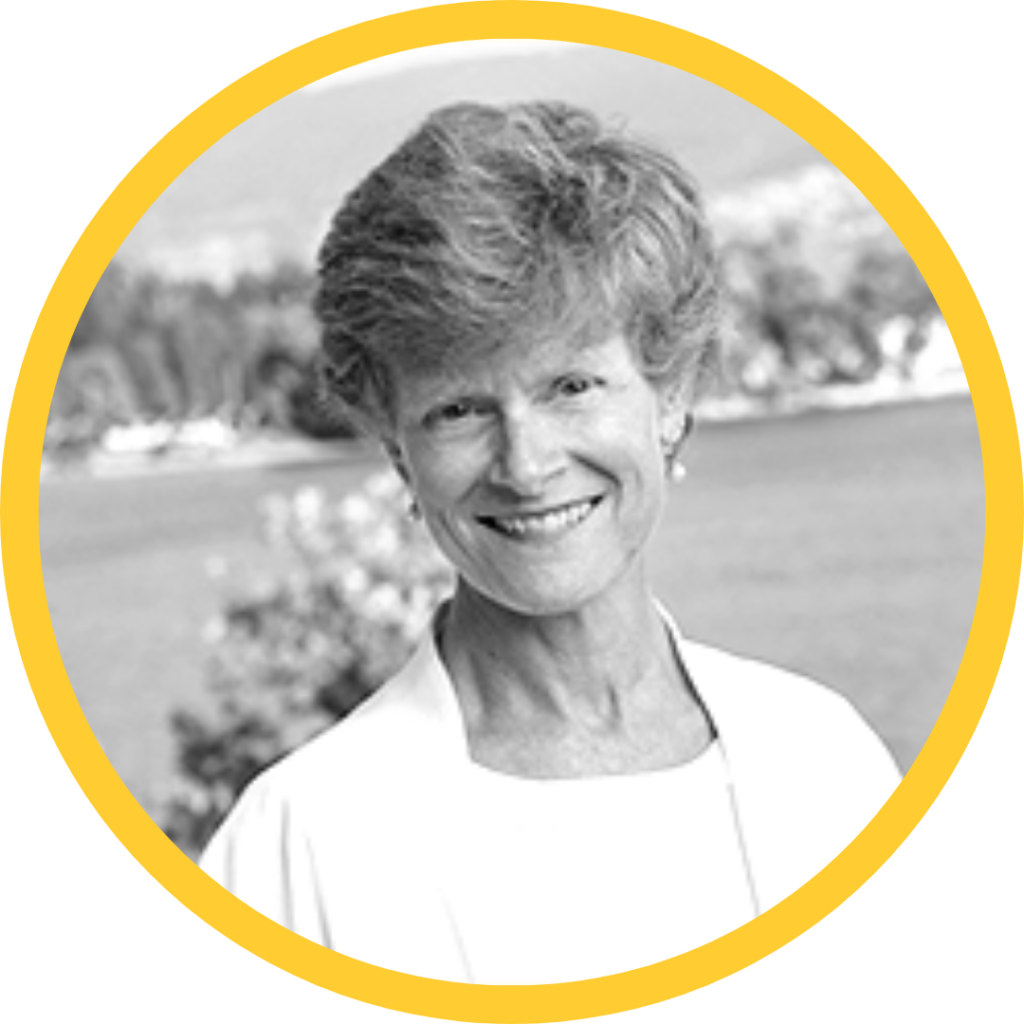 Barbara Grantham has 30 years’ experience as a successful senior executive and consultant in the philanthropic, non-profit and public sectors, across BC and nationally. She has held executive positions with some of Canada’s foremost non-profit organizations, including the BC Children’s Hospital Foundation, the Canadian Mental Health Association, and the Vancouver Foundation. Before joining CARE Canada in April 2020, as the newly appointed President and CEO, Barbara served as President & CEO of VGH & UBC Hospital Foundation, from 2013 to 2019. She, and the Foundation team, successfully repositioned the organization as BC’s philanthropic hub for health care innovation and research, inner city/urban health, specialized surgery, oncology, heart and lung disease, mental health/addictions and other elements of Canada’s largest and most complex academic health authority, Vancouver Coastal Health. In 2016, Barbara was named one of Women’s Executive Network‘s Annual Top 100 Most Powerful Women in Canada. Most recently, she received the 2019 AFP Lifetime Achievement in Fundraising Award in recognition of her decades of philanthropic leadership. She holds a BA degree from Queen’s University and a Master’s in Public Administration from Carleton University. 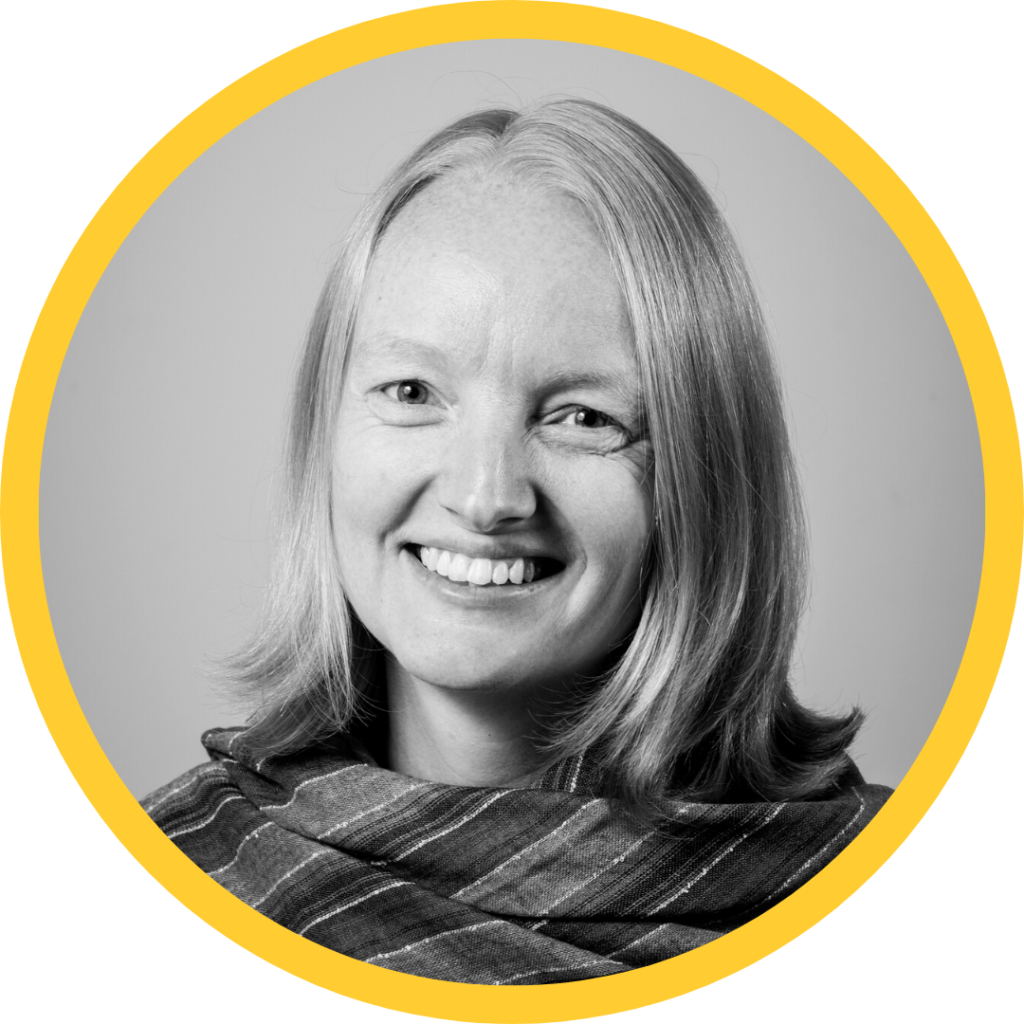 Sherry is an experienced adult educator and community development professional with over fifteen years of experience in the non-profit sector. Having worked in international development in various regions of Africa, she has contributed to local initiatives as a facilitator, curriculum developer, evaluator, and project manager. She has led capacity-building workshops, community-based participatory research, and project evaluation, with an emphasis on participatory methodologies, action learning, and sustainability. Sherry brings a passion for social justice, volunteerism, experiential learning, and the Sustainable Development Goals to her work. She holds an M.A. in Adult Education with a specialization in Community Development from Saint Francis Xavier University and an Honours B.A. in Human Rights & Psychology from Carleton University.