One Solution: Gender Inequality in The Gambia 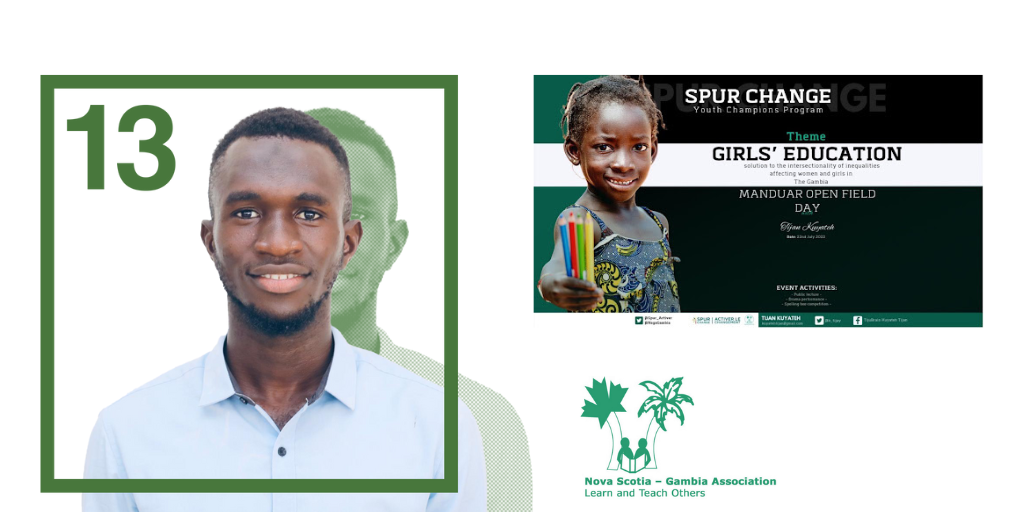 Situation of Girls' Education in The Gambia

There are a host of crosscutting issues confronting women and girls in the Gambia—ranging from child marriage, female genital mutilation (FGM), child labor, sexual abuse and financial dependency. This intersectionality of inequalities facing women and girls is worse within the disadvantaged and underserved communities in rural Gambia. It has been about a decade now since the Gambia Government introduced free education for girls nationwide. This was a milestone in promoting gender equality and mainstreaming. However, in the rural Gambia, not much has changed. A good number of girls are not taken to school. This predisposes them to Early or Child Marriage that put them at the risk of many sexual and reproductive health problems including sexual and domestic violence, maternal mortality among others.

While some girls in their early adolescent stage are withdrawn from school for marriage, others do not ever get the opportunity to go to school. Many of these girls eventually face a lot of social and psychological problems in their marriages but will never be able to divorce because they lack the standard of education to be gainfully employed so they lack financial independence, thus trapped in the cycle of poverty and voicelessness.

Girls’ education in Gambia is not given equal importance as compared to boy’s education. Let’s take Manduar for instance. Currently at the village’s only nursery school, the proportion of boys to girls is 3:1. No doubt, it is highly likely that this gap will increase as these children move to the lower, upper and senior grades. This has been acknowledged by the Gambia Education Sector Strategic Plan (ESSP 2016 – 2030), that equity is least at the Senior Secondary Education, a little less at the Upper Basic Education level and better at Lower Basic Education level, and has identified gender as one of the key factors that determine access, retention and completion. According to the ESSP 2016 – 2030, the biggest obstacle to school enrollment and retention was perceived as the high costs associated with schooling especially for those in the rural areas. For girls, the few that start will hardly pass primary level before they are withdrawn from school and sent into marriage. Poverty has also caused many families to subject their girl child to child marriage or child labor by sending them on the streets to sell instead of going to school.
I have recognized these set of challenges women and girls face and have identified education is a single intervention strategy to address these challenges. Through awareness raising and social behavioral change communication (SBCC) and community mobilization, girls’ education can be promoted and this will in turn lead to addressing the gender inequalities that exist and serve as impediment to the development of women and girls as productive members of society. 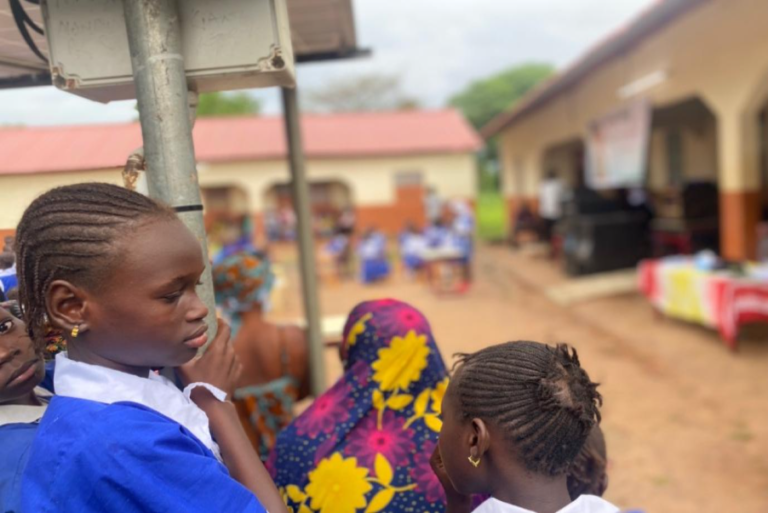 Manduar Open Field Day with the theme Girls’ Education—solution to the intersectionality of inequalities women and girls face in The Gambia was scheduled and  held on the 22nd of July 2022 at Manduar Village in Kiang West, Lower River Region of the Gambia. The activity was marked by public lecture on girls’ education, quiz and prize giving, drama, and spelling bee competition specifically for girls as a sign of empowerment – that, girls are smart enough to be left alone to pursue  their educational goals from primary to post-secondary level and become equal contributors with men and boys in our society.

Impact of my Public Engagement

This was the first time such an event was held in Manduar to highlight the importance of educating girls but also to identify, acknowledge and commit to strive in bringing down the gender-based inequalities impeding the growth and development of women and girls in the little inland village of Kiang West. The event was attended by members of the village development committee, school authorities, parents and students.

During the public lecture, the guest speaker, Ms. Binta Bah, who is a female youth representative at the National Youth Parliament, also a teacher and entrepreneur, explained the imperatives of educating girls. She pointed out for example, that during the recently concluded National Assembly elections which she was monitoring, none of the aspiring candidates in their campaigns pledged to strive for the women’s bill which has been laying down at the Parliament. She said:

“[…] if we had had a female candidate, maybe she will be concerned and will go at length to fight to bring that bill to life because that bill is everything for our empowerment, development and advancement as women and girls”. 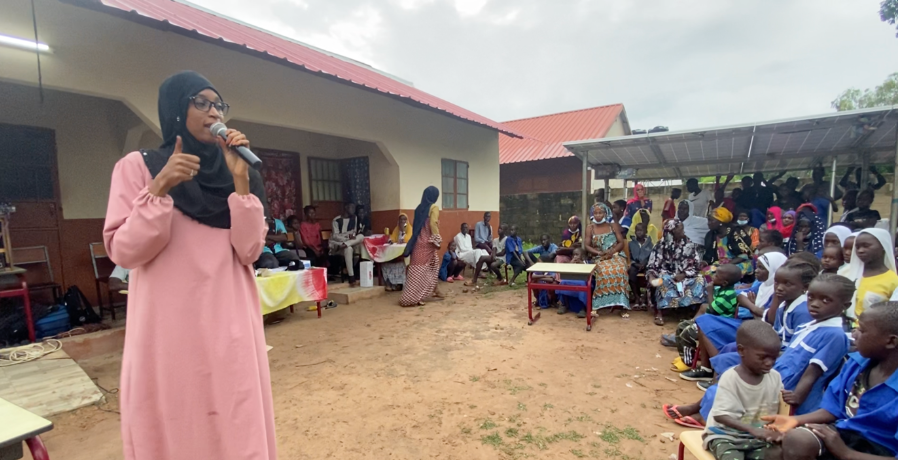 It was indeed fascinating for many parents to see how incredible their girl child was doing especially during the spelling bee completion. During the spelling bee, which was a really tough battle as all the girls were really competing well, parents could be seen, out of excitement and delight, running to their girls hugging them and some even giving them gifts on the stage including cash. Personally, I saw this scene as a special moment that revealed so many things that were hidden to many parents about their children. Many parents in the village are mostly concerned with their farming and sometimes even having their children to boycott school and school activities to give them a helping hand at the rice fields. But with what transpired at the event, these parents will be more than willing to support their girls in the pursuance of their educational goals.

In a random interview with a parent whose child was competing, she confessed to having withdrawn an older girl child from school because of lack of money to support her. “I will not repeat the same mistake with this other one because what I saw today shows me that my girl has the potential to become anything she wants, be it a doctor, nurse, lawyer or teacher. I will support her with everything I have. I was withdrawn from school when I was young to become a nanny. Those that I nannied today do not even care about me, but I know it will not be the same if it were my own children” she narrates. Another mother giving her feedback states: 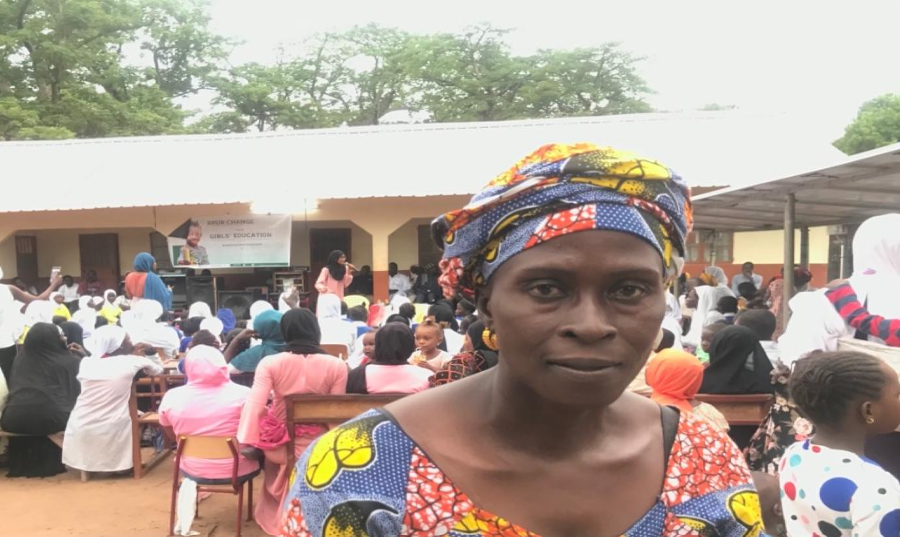 “My daughter is a very shy girl. To see her come in front of this crowd and express herself and win a prize is indeed a great source of delight for me. I pledge to support her in her education to any level she wants to go, and I pledge to not disturb her with marriage”.

Another interesting thing I discovered during this public engagement was that such outdoor educational activities are not frequent at the school despite the benefits it could do to the self-esteem of the children. A grade-2 student Fatou Jammeh was really passionate about singing and dancing but because of her lack of crowd confidence, she was crying during her act; a testimony of what has been missing and what this sort of public engagement for girls can do to their esteem. The village development chair and other educationists all underscored the importance of such outside classroom educational activities as it helps to build the confidence, spirit and esteem of girls to become assertive, empowered and bold.

Keeping girls in school serves as a form of security against many gender-based violence and inequalities girls are predisposed to. Studies have shown that girls in school start their reproductive life later than those that are not. In my community, if a girl is not going to school, the chances of her being married off at the age of 15 or 16 is very high. Similarly, keeping girls in school saves them from child labor which in its own predisposes them to sexual violence from pedophiles.
My work with NSGA has really opened my eyes to the set of challenges facing young people, women and girls in The Gambia as we continue to educate, support and empower them. In this public engagement, I have come to learn that really when parents are fully aware of the potential their girls possess they will be willing to support and keep them in school just as their boys. It has also come to my knowledge that the long standing traditional gender norms and the vicious poverty cycle are at the center of factors impeding the progress achieved in girls’ education and that more of such multidisciplinary and intergenerational engagement is needed to help immensely in bridging the gaps and overcoming the obstacles. In this country, we have been running many campaigns on empowering women through leadership and participation, but it is my view that for a proper representation of women and girls in decision making spaces, women and girls need to be educated and take up those positions. Lest we invest, promote and protect girls’ education, the development transformation of our society will forever be inadequate in all dimensions. Myself and NSGA will leverage every single opportunity at our disposal to continue our engagement to many other deserving rural communities. This has been NSGA’s work for 4 decades now with partners and donors, and will have its doors open for more partnerships in this cause. If you are interested in children, youth and women, then here is a chance to make a difference with us Nova Scotia Gambia Association.

“Nova Scotia-Gambia Association’s ultimate goal is to empower African children and youth with education so they can teach their friends and loved ones how to live healthy lives. Together they work to build vibrant communities with bright futures.” NSGA