Martial Stanislas Towou always had a dream. Fleeing a difficult childhood in the countryside of the West African country of Benin, Martial rejoined his mother in the large port city of Cotonou, where he vowed to succeed in helping abused and mistreated children in difficult circumstances. 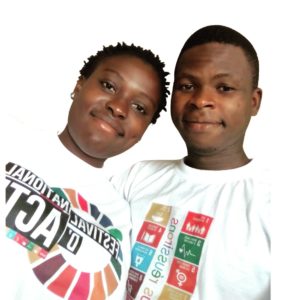 His first opportunity was working for a local NGO, where he participated in public awareness campaigns against forced childhood marriages and violence against women and girls. It was his first hint of success and seemed very far removed from the days when he “hid in washrooms to nibble pieces of bread or when he walked barefoot to school for months” when he lost his shoes.

Inspired by the spirit of the inaugural Benin Volunteer Week in 2017, organized by the Quebec-based, Canadian-Benin SMO Action Bénévole du Bénin-internationale, Martial decided to promote the benefits of volunteerism in his native Benin. Through Facebook, he reached out to other Beninese youth and talked about the importance of giving back to the community. His innovative approach caught the eye of the President of Action Bénévole du Bénin-internationale, who asked him to join his organization as a volunteer. This connection proved to be another stepping stone for Martial.

In 2020, Martial was selected as a Spur Change Youth Champion supported by Action Bénévole du Bénin-internationale as his sponsoring SMO. Martial was thrilled, noting, “I was very happy because my dream is starting to come true.” 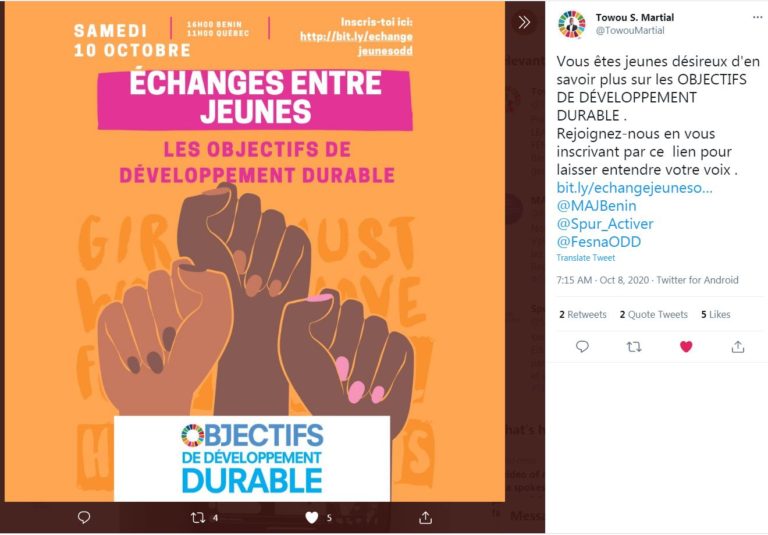 “I quickly adopted the SDGs because they support the causes that I want to defend, and also because I find the promise of the SDGs, to leave no one behind, very reassuring. I advocated for women during the program, mainly as female empowerment, because I saw how hard my mother fought on her own to take care of me and my brothers.”

Within the Youth Champions Program, Martial spoke passionately about the causes close to his heart. He organized four in-person and virtual meetings with 49 attendees, both from Benin and from Canada, and mounted a twitter campaign which garnered 297 direct interaction and over 6000 impressions.

Taking the success and connections made during these activities, Martial started a youth group in Benin to support a small scale farming income-generating program with rural women, mostly mothers in difficult situations and out-of-school girls. It was difficult as they lacked the funding to rent land and pay for the equipment.

All this changed when he met Tanya St. Jacques, a primary school teacher and community leader from the Montreal-based SMO Le Chœur des Altruistes, at an experience-sharing session organized by Spur Change in October 2020. 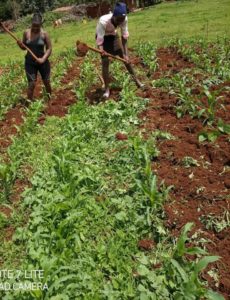 Tanya was so impressed by Martial initiative that she organized a fundraising campaign with the Canadian-Beninese community to help pay to register Martial’s group, JEDAFEM, as a formal NGO with the Beninese Ministry of the Interior and Public Security, to rent land, pay for the crop seeds and to purchase a motor pump to supply the crops with water.

Today JEDAFEM aims to promote the empowerment of women, to support children during their schooling and to train out-of-school girls over 14 years old in sewing, mat weaving and pastry making as a means of economic self sufficiency. The NGO acts specifically towards achieving SDGs#4, #5, and #12. It has been a life altering experience for Martial, “Thank you to the Canadian government for supporting young leaders and to Spur Change for the Youth Champions Program, because now I am able to realize my childhood dream.”