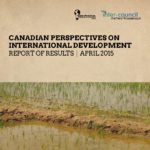 In 2015, the Inter-Council Network (ICN) and Engineers Without Borders (EWB) co-launched the poll results report Canadian Perspectives on International Development. The report, launched on April 23rd, 2015, is based on a public opinion poll undertaken in February 2015 by the ICN and EWB in partnership with the Bill and Melinda Gates Foundation. It builds on similar polls conducted in Canada, such as the ICN 2012 Canadian Engagement in Global Poverty Issues, and those conducted in other G7 countries through The Bill and Melinda Gates Foundation’s Narrative Project. The Report is one of many ways in which the ICN is working to increase Canada’s awareness and support for international cooperation and active global citizenship.

“Canada’s international assistance should be underpinned by the Sustainable Development Goals (SDGs) framework and draw on lessons from Canadian and international experiences. Canada should lead on realizing the SDGs both at home and abroad.”
– Canada 2030: ICN National Submission on Global Affairs Canada’s International Assistance Review, 2016